How to gender mainstream and enhance the quality of decision-making processes: experiences from Uppsala University

Meetings are an incredibly crucial organizational feature in reaching gender equality and equal opportunities. Decisions are made, information shared, and discussed, influencing different individuals and groups in the organization. 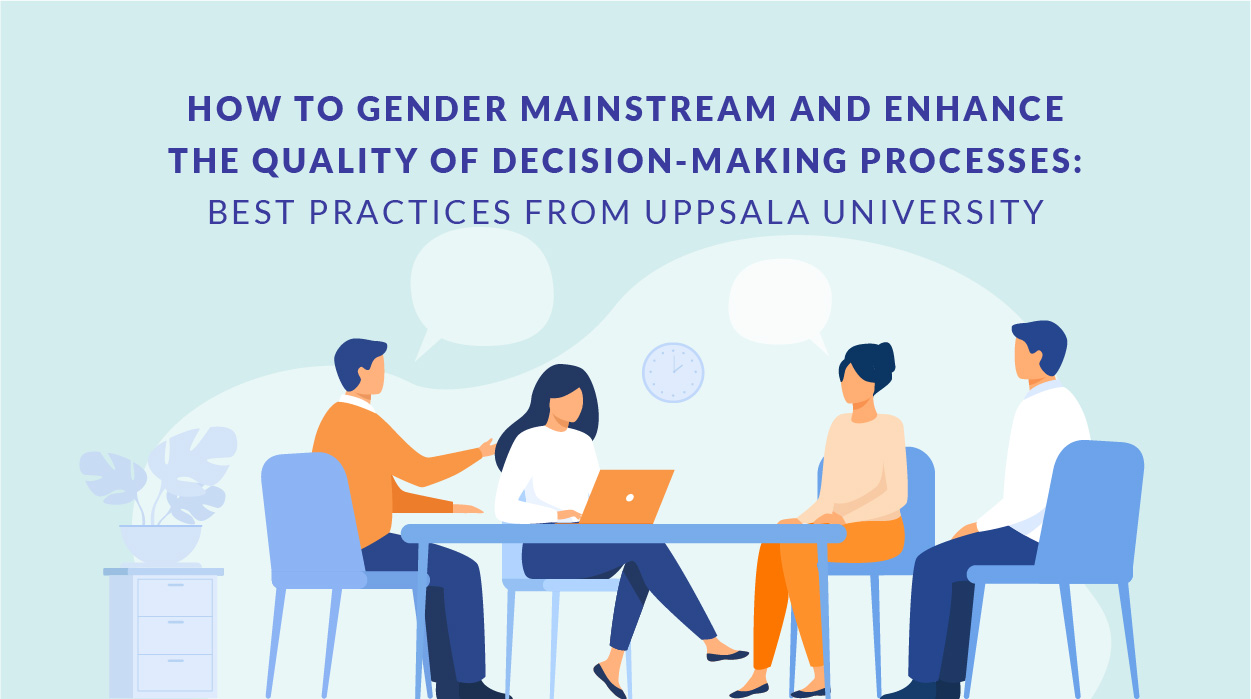 Often, several factors play a role in the communication climate, e.g., gender, academic rank, seniority, and nationality. Therefore, it is important to develop meeting formats where everyone has the opportunity to be heard and speak, demonstrate skills, share experiences as well as influence the direction of discussions and its outcomes (and thus create commitment). Working with identifying and, subsequently, mitigating any decision-making bias has repercussions on co-workers' work environments and possibilities for their personal career development. In particular, this applies to important decisions, such as funding allocation and principles governing teacher and researcher recruitment.

One way to start addressing decision-making in meetings is to get an overview of what types of meetings occur in a specific organizational unit and then map the chairpersons and participants by gender. Is there any gender bias in terms of who participates in which meetings? Different meetings have different statuses, which also affect how active the participants are and who speaks. How does the appointment process of various boards and committees look like? Working with finding and then fixing any bias in the appointment process is one way to gender mainstream the decision-making processes, but it is not enough. Gender equality is more than gender representation. It is also about interaction and gender-responsive content and often comes down to reducing gender bias in meeting preparations and altering meeting behaviors.

An effective way to level out the playing field is to let trained observers look for (and point out) any bias in the meeting practices. Preferably, external observers should do the job. At Uppsala University, the Faculty of Science and Technology has invested in gender mainstreaming, and equal opportunities work. The faculty has observed its Advisory Committees for Research, Education, and Collaboration, building on meeting cultures in the FP7 project FESTA. The purpose of the observations is to prepare material for training of any meeting group. Even if you cannot train the bias out of anyone, you can equip members of boards and committees with procedures and practices to increase gender equality and diversity.

The Equal Opportunities Committee and the Faculty Management planned the content and implementation of gender equality observations with the help of an equal opportunities specialist. The focus was on gender equality and equal opportunities as participation in meetings, as perspectives on various meeting agenda issues, and as a problem of its own. The meeting groups and the faculty college received an overall introduction and information before the observations took place and, to some extent, influenced the design of the observations. It is important to think carefully about what expectations different individuals and groups have of the outcome, for example, managers, students, researchers, administrators and other university staff. It is a challenge to strike a balance between the different needs of stakeholders.

Three observations were made of each Advisory Committee, and it was agreed to give feedback some time afterward, even if that was not the primary purpose. The following questions guided the meeting observations: Who talks a lot and a little? Who starts talking? Who acknowledges whom during discussions and/or reinforces others' reasoning/ideas? Is anyone interrupting - who? The focus was on quantitative data - e.g., measure speech space, speech tours, and references to other participants. During the observations, it proved difficult to observe who acknowledges whom, especially when it comes to subtle confirmation patterns such as body movement and emotions. To measure the amount of talk, to observe how the meeting participants respond to each other, and how integrated the gender equality perspective is in the meeting content, requires either three observers or that the meeting is recorded. In the end, one observer measured how much the participants talked, and another observer noted their interactive and content contributions by asking the following questions: Who asks questions that provide answers guiding the meeting? Who introduces new topics or perspectives in the discussion?

A lesson learned from the FESTA project is to use a combined method with both observations and follow-up interviews to grasp everything around the meeting itself. For example, to pinpoint what happened before the meeting took place. Therefore, after the observations, interviews were done with the meeting chair and two meeting participants about the general meeting culture. The reason was also to validate and develop initial interpretations of the observations. The following questions guided the interviews: Do the meetings tend to be like this? Are the meetings effective? How is the agenda prepared? Before the meeting, is any particular information shared and to whom? How do you think that equal opportunities are included in the meeting? Does the decision basis contain all the relevant information? What criteria are the basis for decisions? Which people influence the decisions? It remains to be seen what training program will be designed, developed, and implemented due to this promotive and preventive action.