In the October issue of 2020, there was an article in a popular women’s magazine The woman, giving a long account of women’s agency and political participation in Lithuania’s history. In May this year, Lithuania has celebrated the centenary of the Constituent Assembly of Lithuania, in which several women took part. 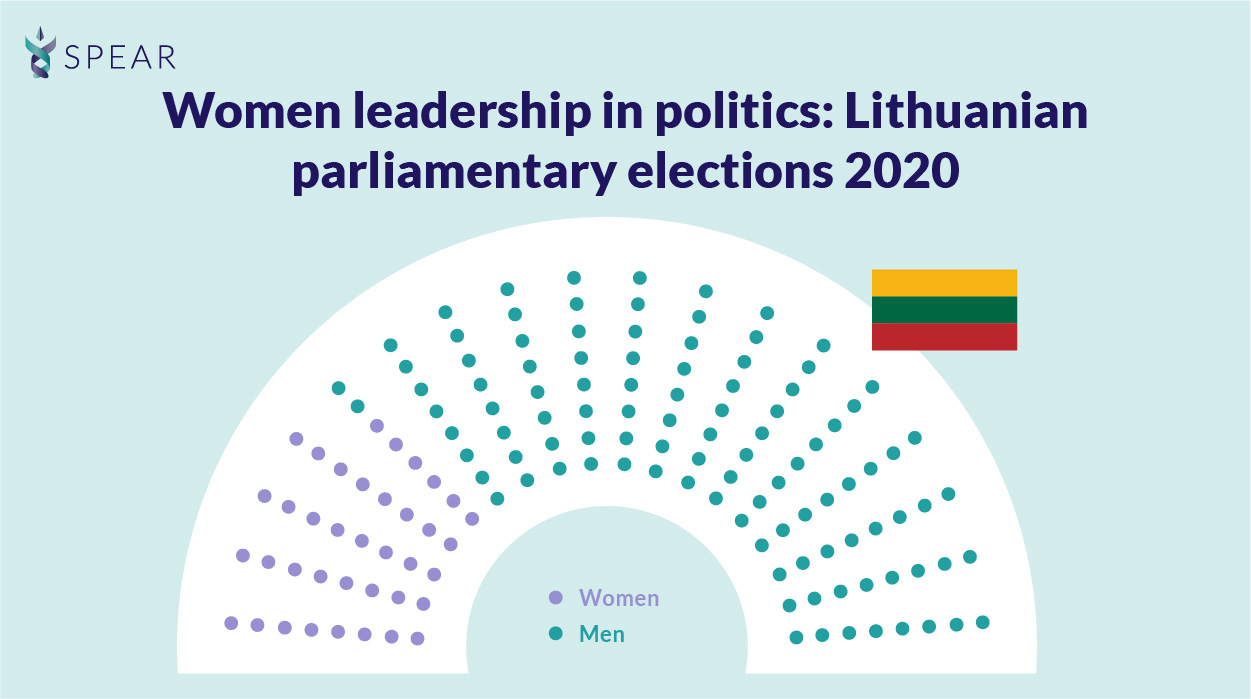 Women such as Felicija Bortkevičienė and Gabrielė Petkevičaitė were among them. Both women were active in the Lithuanian suffragist movement, striving for better female participation in politics and decision making, better conditions for education, and female representation. They were also the candidates in the first-ever presidential elections. The history of female political participation is being continuously rewritten, with new names and facts entering the public discourse. Such historical highlights about politically active women in Lithuania help to fill the gaps and understand the importance of gender-balanced decision making.

In October 2020, Lithuania had a parliamentary election. Lithuania President Dalia Grybauskaitė has stated the morning after the results came out: “In difficult times, women are not afraid to take the responsibility.” Many experts have noted that this time, the parliament will be much more diverse, with many more women participating in national decision making. However, the warning is still there: such turnout should not stop Lithuanian women from continuously striving for enhancing gender equality in all spheres.

In agreement, political scientists have stated that this Parliament election is more favourable for women than any other before. Numbers illustrate a much better situation in terms of gender balance in the parliament: out of 141 parliament members, 27% of positions will be held by women (103 men and 38 women were elected this year). Also, the three parties negotiating the possibility for a future coalition are led by women. The leader of the Conservative party, Ingrida Šimonytė, is likely to become the next prime minister. It is also being considered that Viktorija Čmilytė-Nielsen, the chairwoman of the Liberal Movement, could take the post of the Chairwoman of Seimas (Lithuanian Parliament).

Until now, there have been only two Chairwomen of Seimas in Lithuania, Loreta Graužinienė and Irena Degutienė, and two Prime Ministers, Kazimiera Prunskienė and Irena Degutienė, who has held the office twice. In the previous term, the ruling party had a hard time finding women – all 14 ministries were headed by men, which brought Lithuania to the last place in terms of EU statistics about women ministers. In this regard, it has been vital to stress how important such victory is for the country. And it is not only about having more women in politics and business, but also about admitting that there are plenty of women with personal qualities and qualifications suitable and needed for these professional high-ranking positions.

The topic of women’s participation in politics has been discussed by V. Čmilytė-Nielsen, one of the party leaders (Liberal Movement). According to her, naturally, the number of women in politics and business is steadily growing, but the pace is yet too slow. Lithuanian Parliament needs much more balanced solutions, balanced in the sense that they must be discussed and adopted by representatives of different groups in society. It was not good when there was only one woman in some committees. For example, at the end of the last term, not a single woman was taking part in such an important committee as Human Rights. A committee that works with both gender equality and women’s rights, as well as violence against women. Therefore, it is essential that every committee, when making every decision, has both young and mature politicians, both women and men”, V. Čmilytė-Nielsen stressed.

One of the arguments as to why there is an increased number of female leaders is that all kinds of crises create more favourable conditions for women to emerge and take responsible positions. Dr. Dovilė Jakniūnaitė, professor at the Institute of International Relations and Political Science at Vilnius University (TSPMI), wrote in her Facebook account that “although we are happy with bright women in the future coalition, the rhetoric is focussed on the premise that women are better at solving crises”. “You have probably heard the metaphor of the glass ceiling – the tendency that a certain group, in our case, women, can only reach a certain position in one or another hierarchical structure. There is also a slightly newer metaphor – glass rocks. A metaphor for the phenomenon in which women more easily take on leadership roles in times of crisis or recession. There are more women in leadership when taking responsibility becomes riskier, and the chances of failure are much higher,” says Dr. Jakniūnaitė. According to her, the best illustration of this phenomenon in Lithuania is the Liberal Movement – with only one woman in the party who also gets the leading position. When there is a crisis, there is a need for brave women who can handle it, who are not afraid of responsibility and dares to take risks, argues Dr. Jakniūnaitė.

Vytautas Magnus University (VMU) professor Natalija Mažeikienė points out that there were periods in Lithuanian politics when we had a female President, Prime Minister, Chairwoman of Lithuanian Parliament. “In the long run, we, the citizens, the women, the girls, see women in politics and we see women who hold very significant positions. It could be said that the current situation is a general contribution to the long-term positive process, when more and more women are working in the highest politics”, says the professor. Therefore, the outcome of this election is the result of it.

Prof. Natalija Arlauskaitė, a professor and chief researcher at the Institute of International Relations and Political Science at VU, claims that it is impossible not to notice the current changes. With new female party leaders, this change is quite apparent. However, we should not buy into the illusion that if the first face of the party is female, there are some radical changes taking place. As professor Arlauskaitė also notes, the fact that there are still very few women within the party (as in the Liberal Movement party, for example) signals about some inadequate internal politics and prevailing gender disbalance. “There might be some issues with communication within parties, which hinders more women to be elected and take the high-ranking positions. We need to pay closer attention to the way a specific balance of men and women in the parties and the parliament is re-established”, says prof. Arlauskaitė. She also points out that this fact alone will not change the general situation and solve all the problems. According to her, we must remain vigilant, as the picture of a female leader might also gloss over other important issues, such as the general composition of parliament and still very unequal numbers of members by gender. The professor also states that female and male representation in the parliament should be adequate to the gender balance in society. If this is not the case – it is the best indicator of some systemic barriers. “The reasons for gender imbalance can be various – social or related to internal politics.” When even the most liberal parties with the most progressive values display problems with gender balance, this is the sign of deeper problems, claims prof. Arlauskaitė.

However, the majority of experts agree that this situation shows a positive change. As VMU professor Natalija Mažeikienė points out, it is important that finally, we have female party leaders who are highly educated, well versed in various fields, have good rhetoric, and good negotiation skills, that are especially important in the coalition-building process. According to prof. Mažeikienė, “these women have educated political rhetoric and can make a lot of significant political statements in a language that is acceptable to voters with higher education, but also understandable to those who find political phenomena quite difficult to understand. (...) Political experience, ability to negotiate with parties, ability to negotiate within the party, visible political competences are of utmost importance at this point in history”, says VMU professor. Besides, these women bring new values and higher tolerance to the political scene. Thus, it is important to talk about general political culture and positive changes in it, which female leadership can accelerate. We must understand, that the positive outcome in this election is not only in terms of formal representation but also in terms of changing understanding of what politics is, what are the general values, strategies, and methods of conduct. We must realize that when talking about political culture, we mean not only the political parties but also the electorate. According to prof. Mažeikienė, “predominantly masculine parties usually have specific political agendas, more conservative, focused on traditional notions of family values (e.g., seeing the man in the traditional role of a breadwinner). The old patriarchal values are still predominant in our society, both, among the electorate and political candidates, which largely affects who will be elected as the representatives in the big politics and which values will be represented.”

An important point related to this Parliamentary election in Lithuania is a positive image of female leaders worldwide. Recently, successful political examples have been associated with prominent women – especially the leaders of Finland and New Zealand. While there is a need for broader research, professors in gender studies are willing to agree that there are some traits of leadership and progressive values that female leaders bring into the realm of big politics. “For instance, women leaders tend to have better communication on the political spectrum, engage various groups and raise the socially sensitive questions about health, education, social justice”, argues prof. Mažeikienė. Keeping this in mind, we can consider the recent positive changes in the Lithuanian political arena as a historically significant event, and work further to enhance gender equality in the country.