On the International Day for the Elimination of Violence against Women, Minna Salminen from Uppsala University had the chance to meet and interview Stina Powell. 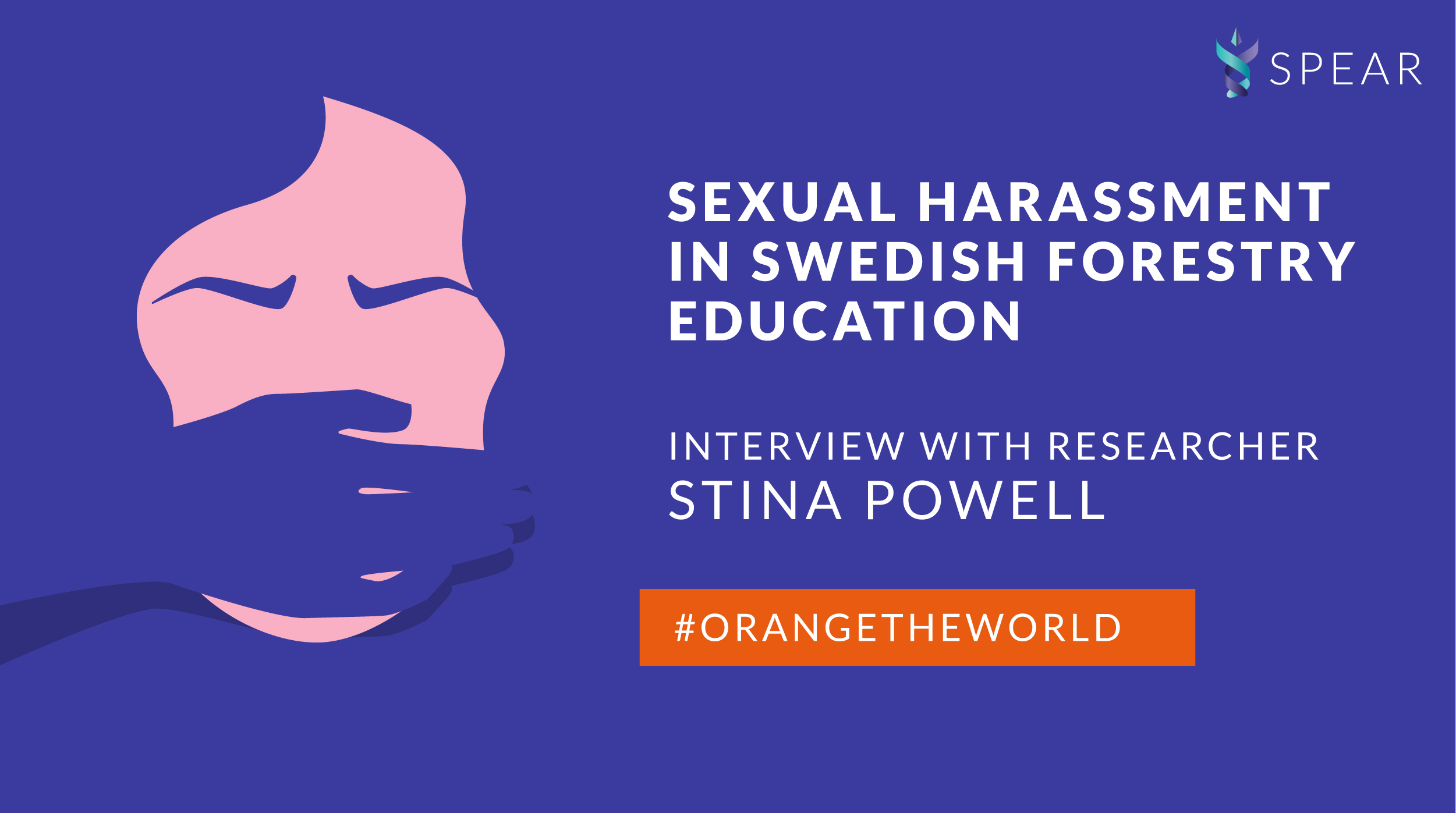 Professor Powell is a researcher at the Division of Environmental Communication at the Swedish University of Agricultural Sciences and a guest researcher at the Centre for Gender Research at Uppsala University. The starting point of their conversation was Powell's recent article on persistent norms and the #MeToo effect on Swedish forestry education, published in the Scandinavian Journal of Forest Research.

This blog post summarizes the whole interview and the reflections about sexual harassment in forestry education with certain behaviours and stereotypes in this field based on real-life experiences shared by female students.

However, before understanding the connection, it is essential to learn about the ''nature'' and this sector's particularities first; this will help us analyse the challenges and discover the potential solutions and actions that could eliminate harassment cases.

What is the path of forest education?

Professor Powell explains that during this program, students train to work in the forestry sector. After a couple of years of courses, students can decide on their professional direction. There are different career paths, either to production and traditional forestry or environment issues and policy.

Despite the quite satisfying participation of female students in the program (25-30%), Professor Powell pointed out that the forestry sector is traditionally a masculine environment. It requires an absence from family for quite a long period of time and entails physically heavy work. Even though it is not a blue-collar but a white-collar profession, the idea of who fits and who does not fit persists.

The ''culture of silence.''

In the interview, Professor Powell mentioned: ''There is this culture of silence.''

Female students reported that they were not aware of each other's experiences because they did not talk and share their stories due to the absence of space. Perhaps they shared their experiences with their family but not within educational environments.

However, there was a momentum of change. Thanks to acknowledging this problem by a professor, seventeen female students dared to send a letter to the University and the forestry sector. Powell argued that this ''tiny'' initiative and strength to discuss gave these female students a great push and motivation to speak up and share their personal experiences.

''It is a tiny little thing you can do to empower people and give people a voice. For it was really inspiring.''

Also, Powell admitted that the sexual harassment problem and this negative culture were known in the education program, but they got ignored and covered under the ''culture of silence''. In the past, the University had organised plenty of courses, seminars, activities, and women's weekends for women interested in following these studies to try to break this culture but, sadly not that much happened.

Another striking aspect highlighted during the interview was the role played by professors. Powell shared her experience when she informed a teacher on sexual harassment incidents, and he felt sad and upset about not being informed earlier.

What does ''the bystander behaviour'' refer to?

Male students in the forestry sector describe themselves by using specific characteristics and have powerful norms. In reality, those people are not that many in numbers, but they strongly influence the culture and are carrying this culture forward. Many people are against them; however, in practice, they fall into so-called ''bystander behaviour''. It means that people express their support in secret, but openly, they remain silent. This behaviour is crucial to change.

What actions have happened when this letter went public? Where they enough to tackle the problem?

After this letter went to the public, there was an intense urgency and motivation from the University (for example, meetings with Vice Counsellors) and increasing interest from the media to feature these stories. This massive publicity and urgency made the stories necessary, but when this news was not as central as before, the urgency was gone, but the problem remained.

As a solution to the sexual harassment problem, Powell suggested introducing courage or cultures of courage as a central aspect and enhancing professors' roles. Both actions can positively influence and change the ''culture of silence'' and ''bystander behaviour''.

We want to thank Professor Stina Powell for her time and her powerful stories.

The full interview is available on SPEAR's YouTube channel and here is the link.