Female and Male Professors at German Universities: Between autonomy, decision-making power and equality. A study extract.

Referring to the research conducted within the framework of my dissertation "The balancing act between organisational structures and individual power to act. Gender-Equality(policy) within the framework of the university organisation from the perspective of experts and professors" (Petrova-Stoyanov), which was published in 2021, we assume in this blog post that both female and male professors in Germany have a power to act and make decisions that opens up many opportunities for them to participate in decision-making processes within their university. This power comes to bear particularly in the context of committee work, for example in appointment procedures, by securing the access of young academics to high positions and confirming the "gatekeeper function" (Klammer et al. 2020) of professors (Petrova-Stoyanov 2021). 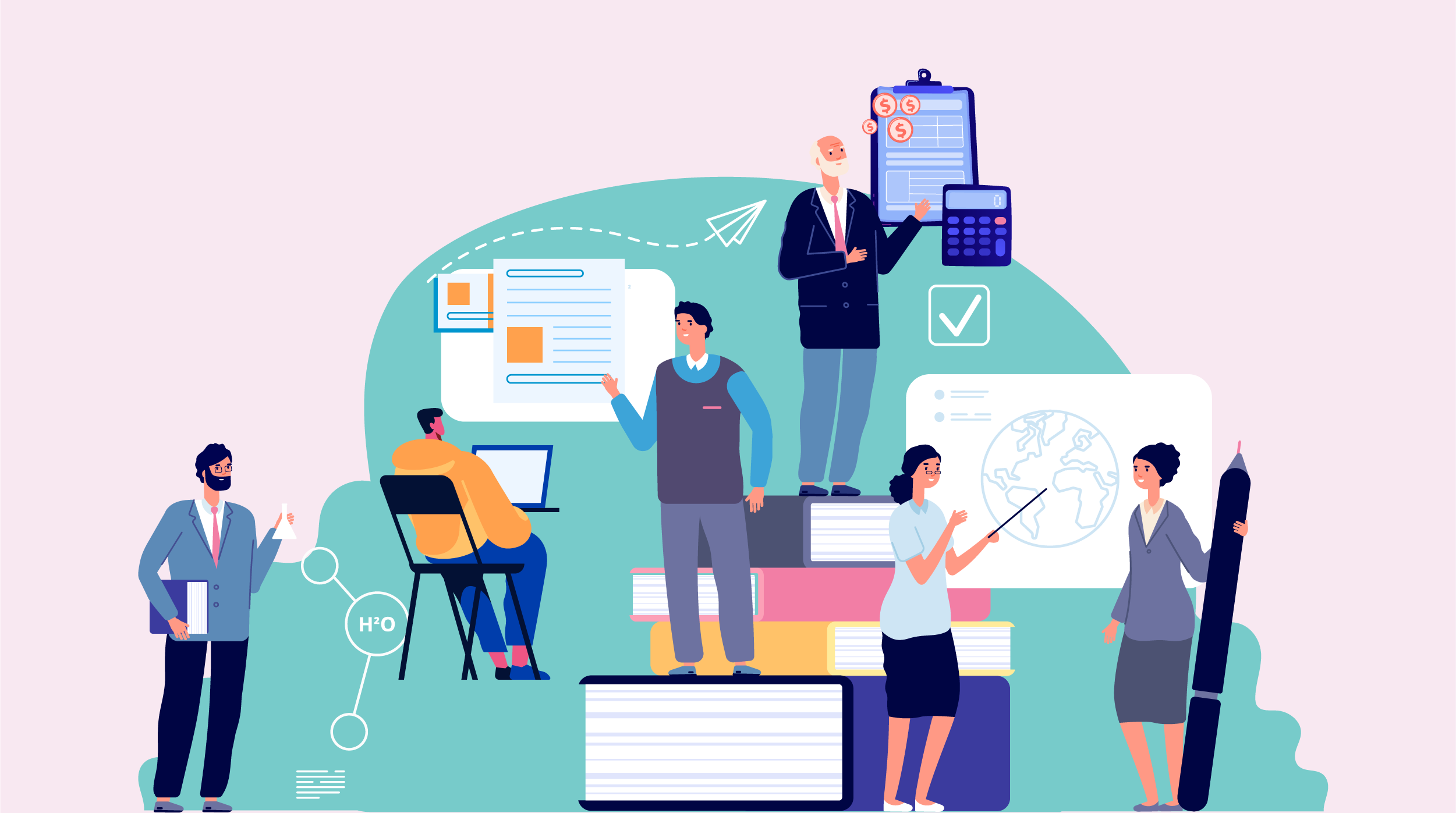 Committee work has a special significance as part of self-administration at universities. Committees not only prepare and make strategic and substantive decisions, they are also considered to be the seed of powerful networks and a source of information on developments and processes at the university (Blome et al. 2013). We chose the relevance of appointment committees with regard to gender equality as an example and asked this: How powerful, and what’s more, responsible for the gender equality process at universities do both female and male professors consider themselves to be? What power do they actually have in decision-making processes at universities?

At the end of the 1980s, a process of change began when New Public Management reforms transformed universities towards an 'entrepreneurial' organisation (Meyer and Rowan 1977). The new requirements to academic life and scientific enterprise were also based on the social expectation that they would provide answers to social, cultural and economic questions, conduct targeted research and be economically successful. New governance and management approaches became necessary to understand the complicated interrelationships (Petrova-Stoyanov 2021).

Universities are per se characterised by a high degree of momentum. Due to the powerful decentralised structures in the faculties, decisions at the management level are difficult to reach independently in a top-down process. One has to 'take along' the parties involved in order to be successful. Particularly in the case of gender equality issues, this helps to understand why strategies that are proposed 'from the top down' often do not have the desired effect. Not only the faculties with their institutes and committees have a strong right of co-determination. Individual academics, i.e. the group that is assumed in this work to be extremely 'action-oriented', also have an autonomy that goes beyond their own decision-making and applies to research and teaching as well as personnel recruiting across the university.  Consequently, within decision-making processes at universities steering is necessary for the coordination of all concerns and requires a high degree of autonomy and persuasiveness from those involved (Petrova-Stoyanov 2021).

At German universities, it is no longer a reality that professors are civil servants who do teaching and research only. As a result of serious changes brought about by the New Public Management and the resulting reforms in higher education (Budäus 1998, Braun 2001), they take on far more tasks than the traditional duties of professors at German universities, who used to be related to the independent implementation of scientific research and teaching. Today, professors are also project managers, have leadership responsibility for sometimes larger diverse teams and promote the careers of their young academics. This means that they take on multidimensional tasks and roles. In fulfilling their main duties, university professors are generally authorised to act freely without former instructions (Klammer et al. 2020, Petrova-Stoyanov 2021). This applies both in terms of content and organisation.

Autonomy and decision-making power of professors

In principle, professors work autonomously in teaching and research. Furthermore, they have a right to equipment that enables them to effectively fulfill their office. The standard equipment should enable them to work academically altogether. The standard equipment includes both academic and non-academic staff as well as financial, spatial and time resources. However, the exact definition depends on the position and the job description, as well as on negotiations with the university management and the respective faculty, and can vary greatly depending on the subject affiliation, university, etc. Professors sometimes bear full responsibility for personnel and are also responsible for the implementation and knowledge gain of their project research. Nevertheless, the research results belong not only to themselves and the project sponsors but also to the university at which the research was conducted and to science as a whole, which they serve without prejudice to copyright (Petrova-Stoyanov 2021).

Due to their position and autonomy, professors have a special power (Bourdieu 2014). In his description of the academic field, Bourdieu (ibid.) points to two types of power and conflicts of interest: On the one hand, there is institutionalised and political power, which results from committee work or the position of individuals in the structures. These professors have the power to decide who is hired and which funds are to be used for which projects, thanks to the autonomy mentioned above. This power is also manifested in the fact that professors can decisively (co-)determine the career of junior researchers. On the other hand, according to Bourdieu, there is academic power, which is fed by one's own position in the academic community. This refers to a person's reputation in certain academic circles, which may or may not go hand in hand with recognition and a certain prestige (Bourdieu 2014). If a professor is declared persona non grata for certain reasons, the reputation of the young researchers he or she supports also suffers a loss of prestige. Both types of power require a great deal of commitment. In the first case, this involves 'showing up' regularly in committees and university events. In the second one that a person acquires scholarly power by contributing to scholarship with publications and findings (ibid.). Bourdieu (2014) and furthermore Prahl (1978, after Kamphans 2014) also recognise the power of the 'established' over the 'new', namely women, who are increasingly entering the 'university male world' of the research system.

Power has many different faces. Historically conditioned and grown, power exists not only between the persons in the scientific field, but also between the subjects, which represent small separate areas within the disciplines. There are, too, differences in the power relations. Rich in financial resources and social recognition are the male-dominated technical and natural science subjects (Bourdieu 2014). On the other hand, the social sciences, education and the humanities, which are often favoured by women, are endowed with few third-party funds and are also usually ranked by society in the lower places (ibid.). This can be explained by Bourdieu's theory regarding the 'superiority' of the so-called capital-creating fields of science (Bourdieu: 2014), whereby the economic valuation of the aforementioned fields has not changed much over the years. Power is attached to economic values and derives from the capital-creating branches of production, which is subordinate to research. The implementation of equal opportunities policies at universities does not provide capital to female and male professors, but may endanger power holders who value rational science and the excellent selection (of the 'best') of staff and young scientists. And this is exactly where the responsibility of the professors themselves lies: Only they have the power to support and promote the success of fair, equal and diverse science. If they block this, they act as gatekeepers of an old system characterised by power struggles. According to Bourdieu, the rule is: the more powerful the person who controls the promotion of young scientists, the more successful the promotion of young scientists. The rules of high symbolic capital that go hand in hand with power apply (ibid.).

The excerpts from the qualitative interviews of Petrova-Stoyanov's (2021) study show that professors attribute little decision-making power to themselves in the gender equality context. Many of the female and male professors interviewed do not see themselves as being overly responsible for the advancement of young academics, although as superiors - assuming they are open to it - they could have a great influence. A focus on promoting women is not explicitly discussed in the context of promoting young researchers, because ultimately, according to the professors’ argumentation, the principle of performance and excellence does apply there. And finally, when it comes to the question of what the professors themselves could have contributed to the achievement of equality at universities, the answers are partly sobering. Most of the interviewees do not see the responsibility directly with themselves and also not with the way in which young academics could be promoted. Some exceptions to this are the interviews with those female professors who want to have brought about a cultural change or a change in awareness for the future and thus (can) use their power and autonomy in the sense of equality (Petrova-Stoyanov, 2021).