What can we expect from an EU certification scheme for gender equality? Some reflections from the CASPER project 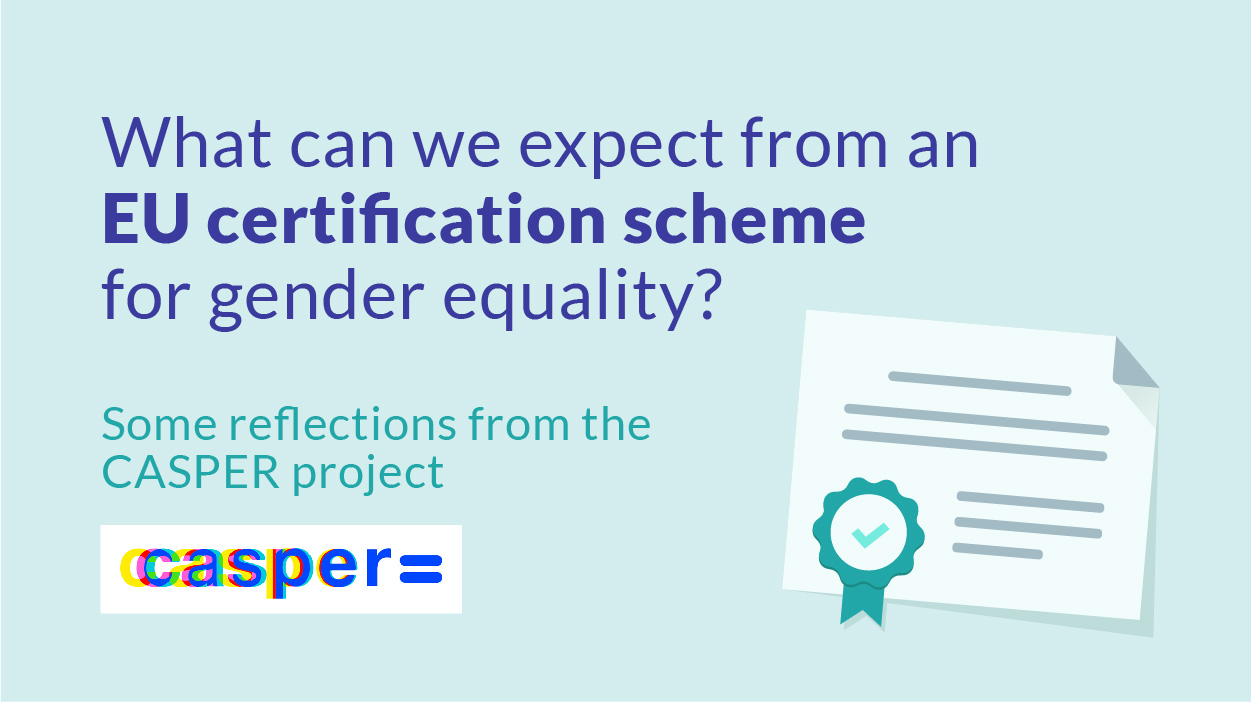 The CASPER project (Horizon 2020, 2019-2022) has examined the feasibility of establishing a European award/certification system for gender equality for Research Performing Organizations. Through various co-creation workshops, we have developed three concrete certification scenarios which are briefly described in what follows. Subsequent consultation with more than +90 stakeholders across Europe highlighted how the national contexts frame the political and administrative feasibility of a pan-European gender equality certification scheme.

Given the importance of national contexts challenges initially the value of a genuine European approach. However, a true Gender Equality Certification/Award Scheme (GECAS) across the European Research Area (ERA) can become a reality and fulfil its empowering potential to the degree that it promotes a continuous, progressive assessment process that is tailored to the underlying disparities of national agendas. The impact of such a scheme can make a difference and boost its impact, especially in those contexts where national gender equality agendas, expertise and resources are missing but compensated by a generous EU supporting framework.

CASPER has developed three GECAS1. The first scheme foresees the introduction of a new EU-wide GECAS, which represents the most ambitious set of features to maximize impact in terms of gender equality and inclusiveness. It would involve a progressive scoring system, require renewal every 4 years and include an intersectional perspective. In addition, it would assess both process and outcomes of the implementation of Gender Equality Plans (GEPs).

The second scenario proposes to establish a Gender Equality Strategy for Researchers (GES4R). It builds upon the well-known and widely implemented Human Resource Strategy for Researchers (HRS4R), offering a similar scheme devoted to gender equality. It would use a simple pass/fail test while assessing mainly the process that has been set up within organisations to achieve gender equality goals. A major advantage of this parallel scheme to HRS4R would be the possibility to take advantage of existing operational mechanisms, as decision-makers and staff are already familiar with the necessary procedures.

The third proposal suggests using the well-known Athena SWAN Charter in the UK and converting it into a Europe-wide GECAS. Athena SWAN represents one of the most advanced experiences at the international level, with high levels of adoption (as of July 2021 there are 962 awards in total) and a rich set of resources, tools, and materials available. Moreover, Athena SWAN is already expanding internationally to Ireland in 2015, the USA in 2017, Australia in 2018 and Canada in 2019 and a pilot in India (Drew, 2022; Tzanakou et al., 2021).  Content-wise, it resembles scenario 1 (new EU-wide GECAS) in terms of its progressive scoring system (bronze, silver, gold) and its assessment of both process and outcomes of GE actions.

A shared feature across all three scenarios concerns the compliance with the recently introduced GEP eligibility criterion to access Horizon Europe funding (European Commission, 2021). No matter which scenario could be adopted, they all guarantee that certified organizations have 1) a public GEP, 2) earmark resources for gender equality work, 3) engage in systematic data collection and 4) implement capacity training activities. These mandatory process features are also complemented by recommended content-related issues such as work-life balance, gender balance in leadership and decision making or the integration of the gender dimension among others. Any of the above mentioned GECAS to be implemented would certify compliance with the GEP EU Horizon Europe eligibility criterion.

A fourth “no direct action” scenario from the EC perspective would consist of maintaining the status quo in terms of leaving the responsibility for gender equality policy and certification largely with national authorities and stakeholders. Taking no action recognizes explicitly the diverse national landscapes where some countries have already developed national schemes - such as the Athena SWAN Charter in the UK or the Total-Equality award in Germany - and others have not. This fourth non-direct action scenario puts the spotlight on the importance of the national context to bear in mind when deciding about a potential EU gender equality certificate in the future.

What is the genuine value of an EU certificate?

One of the most important influencing factors for the adoption of a pan-European GECAS that emerged during the validation phase of the scenarios is the respective national contexts. This is not surprising. First, because differences between gender equality policy frameworks across EU member states are considerable (Wroblewski, 2020). While some countries (e.g., Germany, Sweden) have legal provisions for GEPs and/or supporting infrastructure, other countries (e.g., Hungary or Poland) outright reject gender equality concerns, let alone provide resources or support. Second, the national-, regional- and organizational contexts are important because they shape the implementation of GEP actions and equality practices (Ní Laoire et al., 2021). This is not only a question of the availability of lack of resources (e.g., earmarked equality officers) but also of anchoring structural change within local, context-specific needs, administrative procedures, expertise and support. Given the importance of national contexts and idiosyncrasies for the success of gender equality initiatives - and by extension their certification - urges one to discuss more closely the genuine value of an EU level perspective. What is the potential value of a pan-European approach to certification, considering not just countries that are relatively inactive in terms of gender equality but also those that are rather advanced? What arguments might support the unification and shared standard that such a scheme would introduce - despite the highly diverse policy frameworks across countries?

As previously argued2, “accountability” is one common function of a certification scheme. A simple EU-wide scheme such as the GES4R could be handy for example in relation to the GEP eligibility criterion to access Horizon Europe funding. Such a GECAS would provide the means to establish in an encompassing yet uniform way who is eligible for funding and who is not across all EU countries. A GECAS used primarily for this rather administrative purpose should be simple and easy to integrate into the existing bureaucratic layers within organizations in order to assure its smooth and wide adoption. Its principal value would consist in establishing a uniform, reliable procedure across EU countries to regulate access to EU funding. National contexts in this regard are of secondary importance as all countries have to comply with the same requirement.

However, certification schemes can also fulfil an emancipatory function. Certification implies the definition of quality standards, a threshold of what counts as sufficiently “good” gender equality practice. When combined with a wider framework of support and capacity building, undergoing a certification process can become itself an empowering, transformative experience towards greater gender equality. Clearly, what counts as “transformative” is again highly context-dependent as the CASPER validation interviews showed. For example, participants from Nordic countries considered the “no direct action” scenario as the most desirable one, as a new scheme - unless very ambitious - would be counter-productive by lowering national standards. Stakeholders from the Central-eastern and Balkan countries on the other hand highlighted the opportunities associated with even a basic EU certification initiative. Such a scheme could compensate in part for the lack of official, national initiatives and be an important driver for gender equality in these countries. Either way, for any upcoming GECAS to have a transformative impact, the national context needs to be considered.

While there is certain flexibility within progressive schemes such as Athena SWAN to accommodate more or less advanced GEP actions by distinguishing for example between Bronze, Silver, Gold Awards, this does not solve the underlying challenge across EU countries, namely differing (historical) engagements with gender equality which often run in parallel to differences in terms of available resources (both in terms of economic resources but also expertise). This is to say, that while it might be feasible to imagine a common European certificate for gender equality for all countries, this will only work to the degree that the underlying disparities in terms of support infrastructures are addressed. Somewhat expected, the preferred choice for most stakeholders from Eastern Europe is scenario 2 - the Gender Equality Strategy for Researchers (GES4R). Given the political hostility to gender equality and the lack of resources in some countries, this scenario seems the most feasible in terms of taking advantage of the already established decisions and procedures for the HRS4R certification.

From this perspective, the true function of a European scheme would consist not only of establishing shared quality standards but more importantly to support and drive gender equality efforts where national agencies fail. From other operative certification schemes, we know that the certification authority/process usually is clearly separated from potential supporting infrastructures (of consultancies, training agencies, etc.). However, there is little doubt that gender equality work needs resources. Without continuous assessment in combination with adequate resourcing, any certification system will become an administrative burden without achieving real impact. What's more, it will become a burden more often than not shouldered by women who carry the brunt of equality work in all European countries. What should be to the benefit of women in the ERA, therefore, becomes a disadvantage, especially in those Central and Eastern European countries where resources and national support are lacking already. Hence, if an effective certification scheme will be implemented on a European scale, it needs to be accompanied by a generous supporting framework, targeting primarily Central and Eastern European countries.

1For a detailed description of each scenario, please consult the Blog on the Casper website (https://www.caspergender.eu)

Wroblewski, A. (2020). Report on Monitoring of ERA Priority 4 Implementation (Deliverable 3.2 of Genderaction Project). Institute of Sociology of the Czech Academy of Sciences. https://genderaction.eu/wp-content/uploads/2020/06/D3.2._MonitoringERApriority4implementation.pdf