On 18 May 2021, the University Senate of our project partner University of Rijeka (UNIRI) in Croatia adopted its Gender Equality Plan (GEP) for the period 2021-2025. 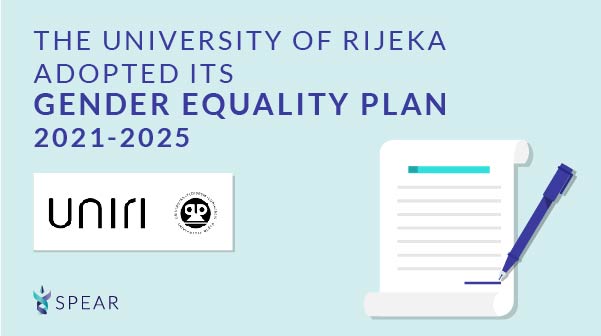 The UNIRI GEP adheres to key national, institutional as well as European and global strategies, tracking policies and criteria regarding gender equality, including the prevention of sexual harrasment and any form of  gender based violence.

The Gender Equality Plan is a set of actions, which can have different degrees of complexity, meant to articulate a strategic view aimed at achieving gender equality. The European Commission’s strategy on gender equality in research and innovation policy aims at fostering equality in scientific careers, ensuring gender balance in decision-making processes and bodies and integrating the gender dimension in research and innovation content. In the context of research organizations and higher education institutions, the European Commission considers a Gender Equality Plan as a set of actions aiming at:

By monitoring 20 different goals and indicators, UNIRI GEP will tackle four strategic areas to identify and implement policies and actions to correct gender biases and promote gender equality within its own institution. Each strategic area addressed by the GEP identifies specific goals and steps to achieve the expected results, while also recognizing the actors and bodies responsible for their implementation.

I. Institutional culture of gender equality: the University Gender Equality Committee that is in the process of being established and the Laboratory for Gender Equality, along with other supporting structures at the UNIRI, will be responsible for the implementation of the GEP, with the overall objective of enhansing gender equality in decision-making processes.

II. Gender equality in scientific and artistic research: UNIRI will introduce various measures in order to empower gender equality in career development and promote gender balance in all research areas, such as ensuring adequate support to female scientists who are parents and caretakers, promoting successful career paths, ensuring well-balanced gender representation in STEM and social sciences and humanities, etc.

III. Gender equality in teaching and training: UNIRI will produce guidelines and offer workshops on how to integrate gender perspective into early childhood education, university study programs and teaching methods, as well as educational awareness-raising programs for the academic community and broad public as well.

IV. Harmony of personal life and professional obligations: the University establishes itself as a safe space against all kinds of sexual harassment and discrimination, while new focus will be also given to the improvement of the quality of life and work.

To further strengthen UNIRI efforts to achieve gender equality within its own institution, the UNIRI Rector, Snježana Prijić-Samaržija, introduced an accompanying Action Plan for the year 2021 during the June session of the University Senate.

The University of Rijeka has developed its GEP within the framework of the SPEAR project, and with the support of its Community of Learning (CoL) and Community of Practice (CoP) which enabled UNIRI to participate in joint discussions, debates and other forms of learning activities with their SPEAR partners and gave them an opportunity for peer reflection, all of which contributed to a sucessfull journey towards the final version of UNIRI GEP.

For further information, you can contact: Daria Glavan Šćulac (daria@uniri.hr)