On the 18th of September, we celebrated the International Equal Pay Day. Established in 2019 by the United Nations General Assembly, this day remarks the continuous efforts at the international level to make the slogan “equal pay for equal work” a reality. 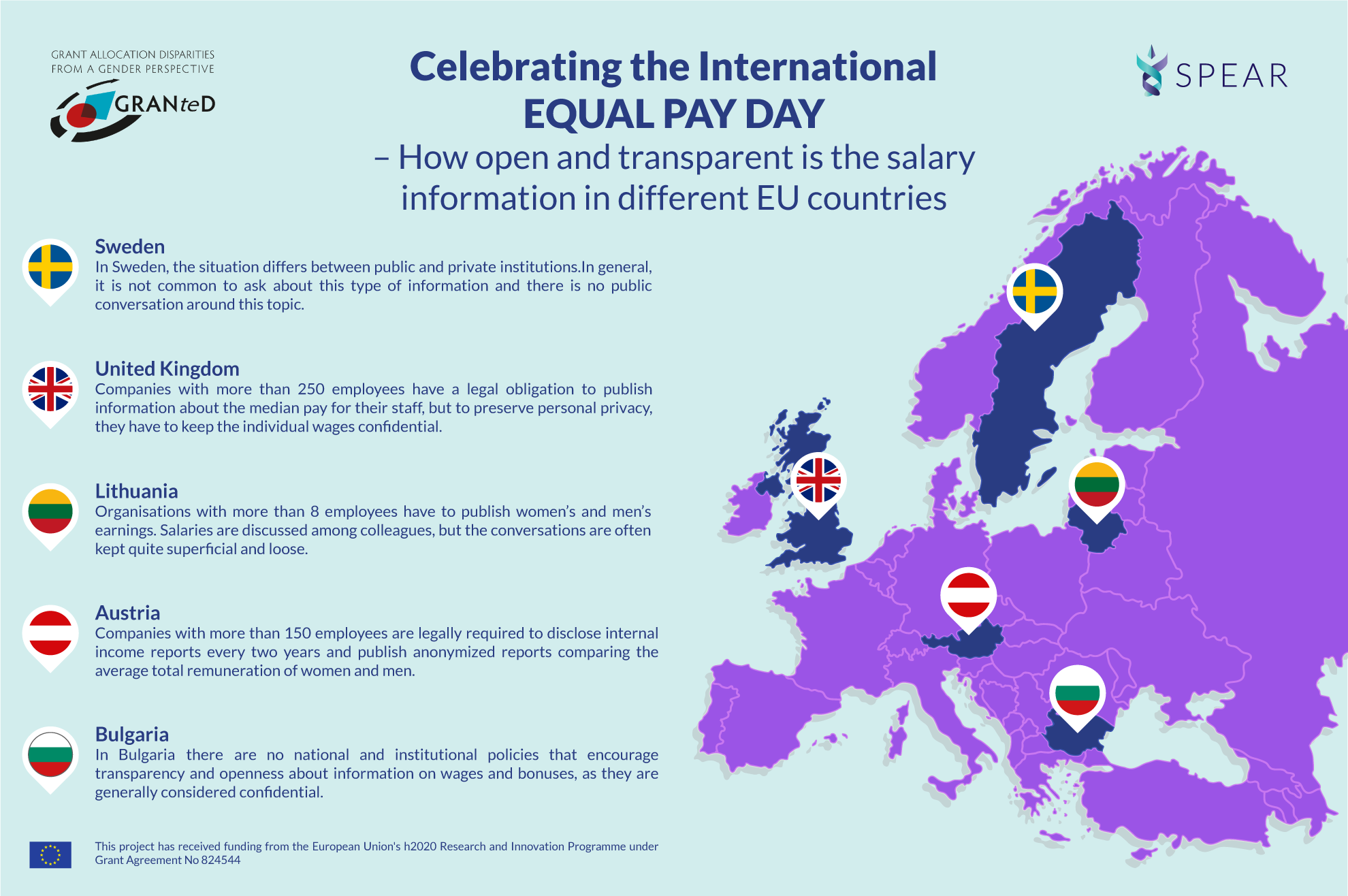 The 5th of the UN Sustainable Development Goals (SDGs) – gender equality and women empowerment – addresses the right of women to work under decent conditions and receive the same retribution as their male counterparts for the same amount of work.

But beyond the official declarations of intents and the global support for gender equality, there are still many steps to take before achieving complete equality. For example, the latest available data show that the average gender pay gap in the European Union is still 11,2% and in the OECD it reaches 12,5%.

Together with the GRANteD project, we decided to go beyond the official data and discover if there is real transparency in salaries and bonus systems in academia. Additionally, if female and male colleagues are allowed and feel free to discuss this topic.

Our campaign #BeOpenAboutPay contributes to the above objectives.

Is it taboo to discuss payments in higher education in Europe?

One way to breach this gap is to talk more openly about wages and bonuses and start the conversation within the working places and among colleagues, uncomfortable as it might be at first.

We asked our project partners whether it is taboo to discuss payments among female and male colleagues in the HEIs and RPOs and if there are any policies in place, either within their institution or at the national level, that allows employees to ask about this information. This is what we found out.

In the United Kingdom, companies with more than 250 employees have a legal obligation to publish information about the median pay for their staff, but to preserve personal privacy, they have to keep the individual wages confidential.

Similarly, in Lithuania starting from April 2021 The State Social Insurance Fund (SODRA) publishes data on average women's and men’s earnings for all organizations with more than 8 employees. Following this impulse, also data regarding the pay gap in various Lithuanian universities were published for the first time this year. However, even though remuneration is discussed among colleagues, the conversation is often kept quite superficial and loose without discussing salary composition or benefits.

To implement the principle of equal pay for men and women, in 2017 the German Federal Government approved the Pay Transparency Act (Entgelttransparenzgesetz), which institutionalizes the concept of equal pay for equal work of equal value. It gives workers the right to ask their employer for salary-related information and report on gender equality and equal pay within their institutions or company. At the state level, in North-Rhine Westfalia, the State Salary Act (Landesbesoldungsgesetz) and the university regulation on performance-related pay set a legal frame for granting performance-related salaries, leaving to the universities to define their own internal directives. As a general rule, professors are compensated according to the so-called “W-remuneration system” which has a fixed part and a variable part made up of performance-related and negotiable elements. Yet, as shown in the Gender Report published every three years by the Women's & Gender Research Network NRW, many differences still persist between the salaries of male and female professors at the same W-level.

In Austria, the 2013 Equal Treatment Act (GIBG 11a) requires companies with more than 150 employees to disclose internal income reports every two years. Employers have to publish anonymized reports comparing the average total remuneration of women and men and take into account the respective collective bargaining agreement or company employment groups and years. The latest data show that for full-time, year-round women employed in the scientific and technical services, the median gross annual earnings reached 72% compared to men in the same positions. However, a recent online survey showed that almost half of the respondents only talk about their salary with friends and family and 14% do not even talk about it with anyone. Even 28% of employers state that salary is more of a taboo subject in their company. Another study shows that while almost two-thirds of the women surveyed in 2017 are clearly in favor of salary transparency, only 55% favour it.

Finally, in Bulgaria wages, criteria for career advancement and conditions for increase of payment are regulated and transparent. In Universities, Trade Unions play a central role in developing agreements regarding remuneration packages. However, at the moment there are no national and institutional policies that encourage transparency and openness about information on wages and bonuses, as they are generally considered confidential. This makes gathering data about the gender pay gap at universities quite difficult: our Bulgarian partners, Plovdiv University and SWU, remark how this lack of transparency perpetuates inequalities and discourages employees from discussing and promoting a discourse around pay justice.

In conclusion, we might say that the majority of the European countries we have engaged in this research, developed policies aiming at breaching the gap between women's and men’s wages and are further encouraging salary transparency. They also introduced legal requirements for employers to publish their gender pay gap statistics. However, talking about salaries and bonuses is still widely considered an uncomfortable topic, if not completely taboo.

The following infographic presents the major findings of this research

Are you working in a university or an RPO? Is the payment system transparent in your country? Join our campaign #BeOpenAboutPay and share with us your experiences!